Middleware is a series of layers that incoming HTTP requests must go through before reaching the controllers of your application. This concept is introduced to CodeIgniter by Luthier CI and opens up a range of possibilities in the framework.

There are two possible execution points for the Middleware in Luthier CI, and they are related to the loading and execution of CodeIgniter controllers:

It is possible that at some point you need to execute code before your Middleware, and the way to do it is by defining a public method in your controller called preMiddleware:

All Middleware should be stored in the application/middleware folder. A Middleware is any PHP class that implements the Luthier\MiddlewareInterface interface.

The Luthier\MiddlewareInterface interface only defines a method called run(), which is the entry point of the Middleware.

As of version 0.3.0, the use of Middleware classes that do not implement the Luthier\MiddlewareInterface interface is OBSOLETE and will stop working in the next version

It is necessary that both the class name and the file name are exactly the same.

Avoid using a name of another framework existing resource, such as a controller, model, or library.
A good practice is to add the Middleware suffix to the name of your Middleware.

You can assign a Middleware in different contexts:

As the name implies, global Middleware runs on all incoming requests from your application:

Where name is the name of the Middleware and exec_point is the execution point (by default, pre_controller)

You can use an anonymous function instead of the name of a middleware:

Route middleware is defined as any other property. In the case of route groups, it goes in the second argument of the Route::group() method:

For an individual route, the Middleware is also defined as a property:

In individual routes and route groups, the execution point is ALWAYS pre_controller

To run a Middleware from a controller, use the run() method of the middleware property:

This method supports a second argument with the parameters of the Middleware:

It is possible to run Middleware from an external class, as long as it has a run() public method

Visit us on Github! 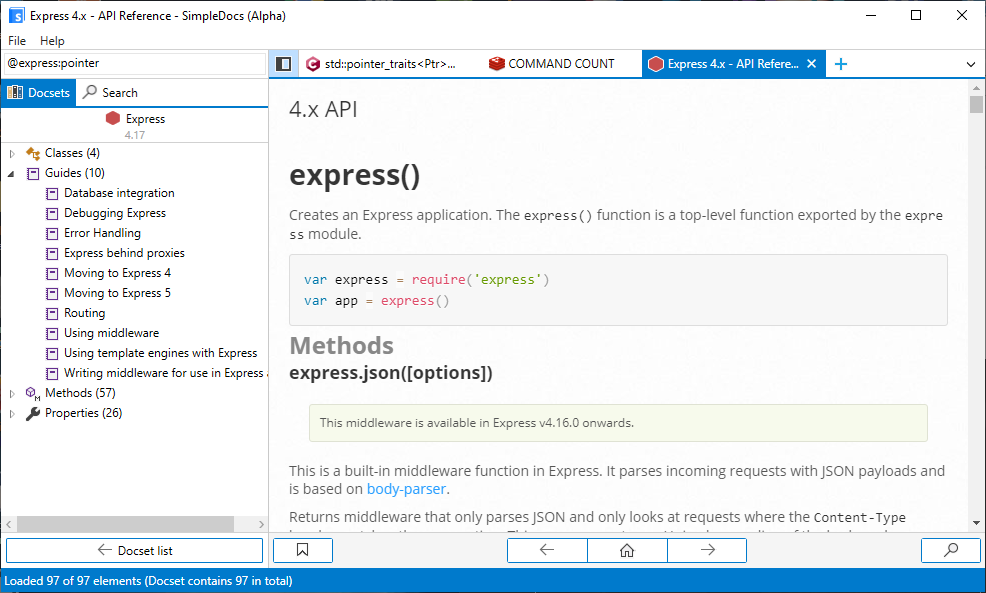 Access the documentation of more than 200 frameworks, libraries and programming languages with SimpleDocs, even without internet connection!